There is unrest on the Moon.  A ruckus has broken out over reports of funny Moon Bear things, which has caused Moon Critters to run around hitting one another with rolled up newspapers, thus causing the head Genie-arse Moon Critter – renowned for his well-stocked Moon news-agents shop on the corner – to run out of news-papers.   John Revolting, the Moon Oracle is just thankful his news reports are either verbal or psychically transmitted. 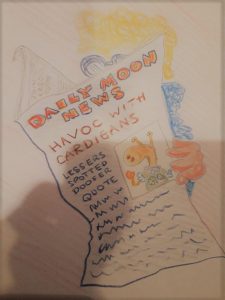 Now remember, with the Karillapig coming from the dark side of the Moon, baked beans are not something he has been in regular contact with.  Fair enough.  It was the Hippobuffafrog who, during a rummage searching for clues as to how space travel was made possible for Earth Critters, found the pan abandoned in the sink with the burnt baked beans –still burnt and still stuck.  On making this remarkable discovery, the Hippobuffafrog immediately summoned the Karillapig, as he believed he had found irrefutable evidence of space travel.  You see it’s like this.  If you were to look at the situation from the point of view of the Hippobuffafrog and the Karillapig, you would understand this is an easy mistake to make.  The pan bears a startling resemblance to the preferred means of travel on the Planet Eris, inhabited by the Erisy-ite-lings.

Erisy-ite-lings are round Space Critters.  Basically, if you looked at an Erisy-ite-ling, you would be forgiven for thinking it looked rather like a lump of modelling clay cut into a short cylinder shape. 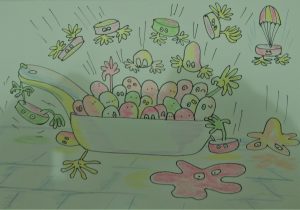 This is because Erisy-ite-lings are made from modelling clay cut into short cylinder shapes.  They are all pink, except for the blue ones, which are all green.  They have eyes, ears, noses, mouths, arms, legs and special springs to move about, but all you can see are the eyes and the enormous feet because everything is see-though.

That is the reason why the Hippobuffafrog has got excited.  It is also the reason the Karillapig is excited.  It’s quite obvious now.  The Earth Critter known as Derek Bumblebottom must have been travelling through space secretly.  It is also obvious now that the burnt beans are the fuel.  This theory must be put to the test.   The plan is for the Karillapig and the Hippobuffafrog to eat some of the beans, plonk themselves inside the pan, then psychically link through the flower antenna’s on the Karillapig’s head to ‘The mighty Captain Wide-Shoes’ (the Moon Critter who does
that air traffic control thing) then hey-presto, Earth Critter space travel will be proven.

An almighty case of wind is exactly what’s happening here.  The Karillapig and the Hippobuffafrog have settled themselves down nicely into the pan after eating copious amounts of baked beans and are waiting.

Ahhh, this must be the ‘blast’ that launches Earth Critters into space think the Karillapig and the Hippobuffafrog.  Of course it is, what else could it be?

This ‘whoosh’ sends the Karillapig and the Hippobuffafrog hurtling out of the pan.  Not through time and space as originally intended, instead straight into a contraption know to you and I as a clothes horse.  A close horse currently sporting Derek Bumblebottom’s underpants. 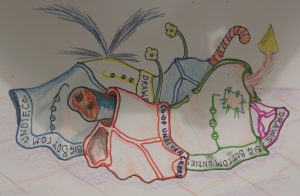 The furry thing with the pointy ears is amused.  The Karillapig and the Hippobuffafrog do not share this amusement.

So, it’s back to the drawing board.  More investigations are in order, though following this ordeal, the Karillapig and the Hippobuffafrog are going to go and chill out for a bit in the washing-up bowl at the bottom of the Bumblebottom’s garden.  Next time, maybe they should consult the Arrogant Horse?

Until the next ‘Earth stopping’ instalment of the tales of the Karillapig, I’ll bid you tarah for now..

Michelle Graham 1st (well actually I’m not the first – apparently there’s other people in the world called both Michelle and Graham, though both can be male names… just saying)….

Remember kids – always eat your apples from the outside first…….

Apparently, a slap in the face from a wet fish will not aid space travel. They didn’t tell me this…..