This week there’s a bug going around on the Moon.  This bug is far worse than the skive-a-litas that’s been halting work at the cheese mine where most of the Moon Critters work.

Moon Critters who have been inflicted with the dreaded Urang-untangles have in the past also been known to stick out their bottom lip as far as possible and go around shouting “Oggi-Oggi-Oggi” only to be met with silence.

A duo of Moon Critter doctors, Dr Bodgeit and Scarper, suspect this break out to be the work of the meddling evil Nivek Shenanigan – a self-proclaimed expert on everything yet master of nothing.   Nivek Shenanigan is not very bright, so often, when dabbling in the affairs of others, things tend to blow up in his face somewhat.

Nivek Shenanigan has been trying to dabble in the lives of the Moon Critters who work in the cheese mines.  Nivek Shenanigan didn’t think this through, so his dabbling set lose a flock of Calendar Moon Geese who were disguised as flower pots, thus allowing the outbreak of the dreaded Urang-untangles.

Instead, the Karillapig and the Hippobuffafrog decided to pay a visit to the Arrogant Horse.

The Karillapig and the Hippobuffafrog have just called for the Arrogant Horse and are plodding down to the pond near the stable.   What’s this though?   There are loads of Earth critters round the edge of the pond with stick things – the stick things have string on them….  The string is dangling in the water – it’s perfectly clear this is a communication device, possible even some sort of transporty thing.

The Arrogant Horse knows the Human’s didn’t walk to the Moon because they don’t have hoofs.  The Karillapig and the Hippobuffafrog both think it likely they transported to the Moon via the string in the pond.

Well it’s like anything else, there’s only one way to find out.

A plan is needed.  The Karillapig convinces the Arrogant Horse the best course of action would be to make the Earth Critters move long enough so the Hippobuffafrog can confiscate the stick things with string on, so the Arrogant Horse kicks them into the pond.  That should do it.

With a kind of a smooth move (if a smooth move involves a bunch of fishermen getting dunked), at the exact time of the splash, the Hippobuffafrog makes off with the sticks with string on – fast as you like.   The trick now is to figure out how they work…..

The stick things have swimmy creatures attached to them.  A lot like in the tank in Lewis Clough’s bedroom at Christmas.  These could be visitors from another planet?  The Hippobuffafrog chucks them all back into the water just as the fishermen are climbing out of the pond.  One of the swimmy creatures slaps a fisherman right in the chops, and knocks him back in. 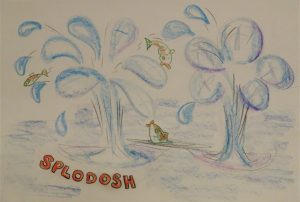 One of the fisherman’s wellies have fallen off.  The Karillapig notices these wellies are rather like the holding pens in the Moon’s equivalent of Ikea.   Once inside one of these wellie shaped holding pens in the Moons equivalent of Ikea, Moon Critters have been known to lose all sense of sanity.  Best be on the safe side and chuck this as far into the pond as possible to avoid any unnecessary loss of said sanity.

The wise being who lives in the pond near the stables in highly amused by all the commotion.  The Arrogant Horse thinks this must happen all the time, and there must be a book about it already written because the wise being is sat on his Lillie-pad shouting “Read-it”.

Well the Hippobuffafrog can’t seem to get the stick things with string on them so he’s decided to chuck them into the pond. Enough of all that, now the Karillapig, the Hippobuffafrog and the Arrogant Horse are all exhausted, so they’re going to plod off back to the stables to share stories about their favourite style of bobble hat.

Next time on the adventures of the Karillapig, the evil Flapperbiller makes an appearance on Earth and eats all the Lamp-posts in the street next to yours. The local councillor is up in arms!

Michelle Graham…. as you know.

Baked beans cause bottom gas – but it’s not enough to aid space travel apparently….. Why doesn’t anybody tell me these things?