Has anyone seen my marbles?  I’m sure I had them.

The return of the Fragon.

In the latest nail-biting installment of ‘the adventures of the Karillapig’, we start with an update beamed straight down from the Moon by John Revolting the Moon Oracle.

The past couple of weeks on the Moon have been a challenge for Moon Critters.  The reason?  Well, it turns out the infamous Fragon has made an appearance. 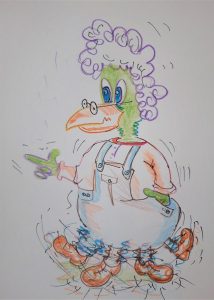 Dainty-Wobbly-Britches accidentally summoned the Fragon when she got the instructions wrong whilst assembling a cabinet from the Moon equivalent of Ikea.

The Fragon wasn’t too happy about being summoned to the Moon.  The Fragon was in the middle of a well-earned holiday on that ‘other new Moon’ Earth critters reckon to have found.  Apparently, the cheese is much different there, but that’s another story.

Fragon’s (in case you’re wondering) look remarkably similar to Dragons, the main difference is rather than being covered in scales, Fragon’s are covered in that same fluffy stuff pencil cases are made from here on Earth.

You know how Dragons breathe fire?  Well Fragon’s breathe candy floss.  This may sound lovely, but it’s not.  Once a Moon critter put his marbles down, and when a Fragon breathed candy floss all over the place, the Moon critter ended up losing his marbles for a considerable time.

The Fragon has been stomping around on the Moon this week.  He has left a lot of large foot-prints in the cheese that makes up the Moon’s surface.   The Lamp-Dwellers mistook one of the foot-prints for their Moon Crater, and are still waiting for the lock-smith to let them through their door. 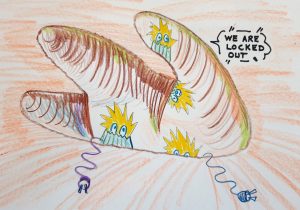 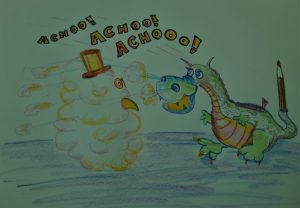 Inspector Clueless is struggling to see the funny side of this, though the Fragon is finding this highly amusing.

Currently, Moon critters everywhere are in a bit of a panic.  There is concern that their marbles may become temporarily lost if the Fragon breathes candy-floss on them, so there has been a lot of mass-marble hiding going on.  The problem is that in trying to hide their marbles from the Fragon, several Moon critters have forgotten where they’ve hidden their marbles, so have lost them anyway.

Dingbat-itus is rife of the Moon at the moment.

There is a moral to this story.  You have to be careful where you leave your marbles, as the Karillapig and the Hippobuffafrog have also found out this week.

Back on Earth, the Karillapig and the Hippobuffafrog have gone over the fence at the back of the Bumblebottom’s garden into the allotment.

On the allotment, the Karillapig and the Hippobuffafrog have found a patch of green, leafy marbles.

Sprouts to you and I.

The Karillapig and the Hippobuffafrog recognise the importance of keeping your marbles safe, and so have dug them all up and are currently keeping them safe in the washing-up-bowl at the bottom of the Bumblebottom’s garden.

Meanwhile, the allotment mafia are up in arms.  The whole ‘squashed cabbage’ spectacle has only just died down, and now there appears to be a sprout nicker on the loose.

The allotment mafia know how precious Derek Bumblebottom is about his sprouts.  Frankly though, they are secretly relieved it wasn’t the Bumpkins Pumpkins that were messed with.

Back in the relative safety of the washing-up-bowl at the bottom of the Bumblebottom’s garden, the Karillapig and the Hippobuffafrog are having a conflab.   They have decided to enlist the help of the green god on wheels’ to keep the green leafy marbles safe.

So that’s what’s happened.  The Karillapig and the Hippobuffafrog have gathered up the green, leafy marbles and offered them to the green, god thing on wheels for safety.

What’s actually happened is that the Karillapig and the Hippobuffafrog have chucked Derek Bumblebottom’s prize sprouts in the bin.

No doubt Derek will throw a wobbler when he finds out….  We’ll have to wait until the next instalment to find out.

I don’t know about you, but I can’t wait!

Tick-tock goes the clock – but will it aid space travel?