Well howdy doody to you all….   Yowzers, it’s been about two weeks since we last visited the Karillapig and caught up on his amazing escapades.  Funny, it only seems like 14 days to me! 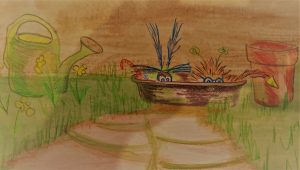 Anyway, let’s crack on with the reports into this epic journey……

Over the past two weeks, the Karillapig and the Hippobuffafrog have been rather busy.  I say busy, the first few days after the clock debacle were spent recuperating in the washing up bowl at the bottom of the Bumblebottom’s garden.  The curious bat in the shrubbery is still keeping a keen eye on the Karillapig and the Hippobuffafrog.  Frankly, he just doesn’t trust them.

It was whilst chilling in the washing up bowl at the bottom of the Bumblebottom’s garden, and gorging on crochet squares that a particularly interesting news bulletin was beamed down from John Revolting the Moon oracle. The flower antennas on the Karillapig’s head keeps the Karillapig and the Hippobuffafrog up to date on all breaking Moon news. Sweet.

Apparently, following the Evil Flapperbiller’s snoop around the secret tunnels underneath the layer of cheese that makes up the Moon’s surface, a secret stash of the juice extracted from the wall-paper trees had been knocked over, thus spilling the orange/red juice everywhere – this would have been okay if the orange/red juice from the wall-paper trees hadn’t accidentally gone down the Moon’s plug-hole and turned the Moon a reddish colour.  According to John Revolting the Moon oracle, Earth critters were blaming this pneumonia on an eclipse or something? 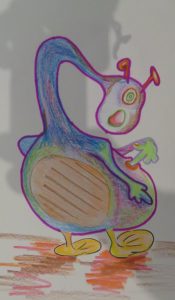 Well you can imagine can’t you?  You’re innocently sticking your finger in your belly button when suddenly your bum falls off.  You could end up leaving your bum anywhere, and this is exactly what happens to the ‘Bum-fall-off-asourus’ regularly.

*There was that one time many Moon Critters still reminisce about when the Bum-fall-off-asourus accidentally left his bum at a table during an A.R.S.C the Moon union meeting.  None of the Moon critters present noticed anything different, in fact the Bum-fall-off-asourus’ bum was given a final vote on something very important (I think it was to do with a meeting about a meeting)….

Well now it turns out the Bum-fall-off-asourus has only gone and left his bum next to the secret door. This is the secret door that leads to the labyrinth of tunnels underneath the layer of cheese that makes up the Moon’s surface.  This week, the secret door has disguised itself as a turnip.  The cheese miners are wary of turnips at the best of times, but now there is a random bum next to this turnip, there is a feeling of unrest.

The cheese miners have consulted the fur-ball like Moon critter who is widely regarded as an expert when shooing off troublesome turnips. The fur-ball like Moon critter agreed to do his stuff, and shoo off the turnip, but on arrival the secret door was no longer disguised as a turnip, it was now disguised as a pair of under-crackers to cover up the mysterious bum that had appeared. The Bum-fall-off-asourus will be pleased when he retrieves his bum as he was getting low on under-crackers. This hasn’t turned out to be such a travesty after all. 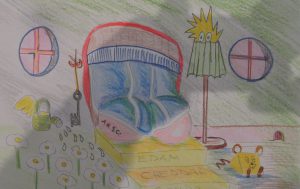 As you can see, once again the Moon critters have averted another calamity. A.R.S.C the Moon union heard about all of this. They are currently in a meeting deciding whether to have a meeting about turnips.

The morale to this story kids, is don’t spend too much time sticking your fingers in your belly button – or your nose – or any other available space……

I bet you cant wait for the next instalment…… neither can I actually, I made the mistake of watching daytime tele… Jeez, that was a close one! Until next week then my dear friends…

Moofus-Mc-Radling, pancake mix specialist here on Earth! If only I had that skill….. says no-one…