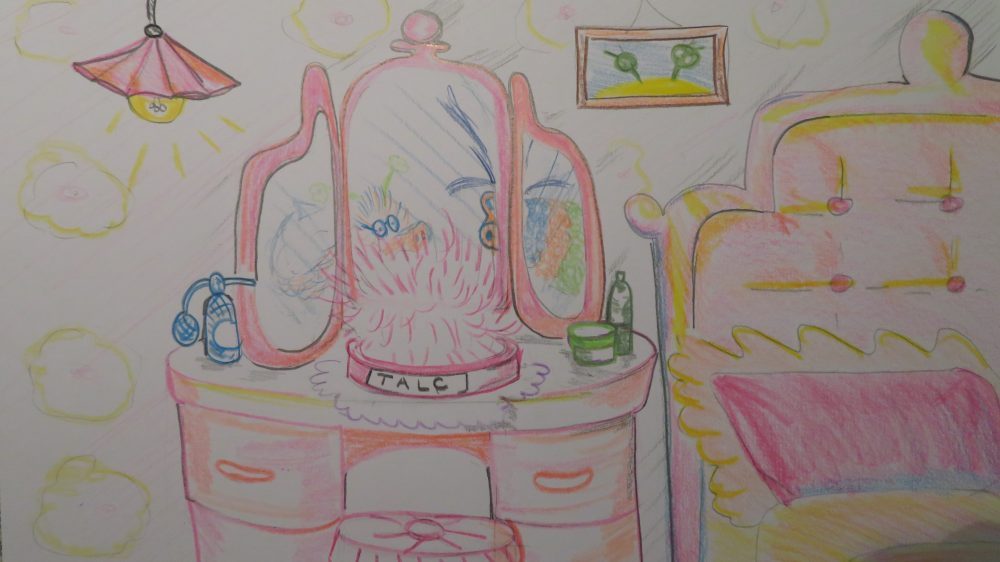 You may remember, though you’d be forgiven for forgetting, that the Karillapig and the Hippobuffafrog were offering the green god thing on wheels ‘stuff’ after having witnessed Doreen Bumblebottom doing the same.   Derek Bumblebottom’s cap was a casualty.  Derek Bumblebottom is vexed about this, but that’s another story.   Added to all that excitement, the Karillapig attempted to have a conversation with a milk bottle (the milk bottle declined to comment), and the attempt to travel through space in a grandfather clock was somewhat of a disaster.  And how can we forget the Allotment Mafia who are in talks following the discovery of more flattened cabbages.

Next to the potions is a fluffy ball in a pot of something called talcum powder?  The Hippobuffafrog thinks the fluffy ball is a younger version of himself, so decides to join it by jumping in.  It turns out that jumping into a pot of talcum powder has consequences.  With an almighty ‘thud’, the pot of talcum powder hits the floor, thus causing a massive white powdery explosion.  Everything in the room is now white, including the Karillapig and the Hippobuffafrog.  It turns out that being covered in talcum powder seriously hinders the ability to remain invisible.

There is movement in the Bumblebottom’s residence.  Doreen Bumblebottom has heard the ‘thud’, and so armed with a rolling pin has decided to investigate.  The Karillapig and the Hippobuffafrog decide now would be a good time to scarper.  It’s bad enough having your invisibility compromised, but now they have started to sneeze.

Doreen Bumblebottom has arrived upstairs armed with her rolling pin and is confronted with utter mayhem.  The bedroom is covered in talcum powder, and there are strange footprints everywhere.  Doreen has a secret word with herself; either it’s time to call in the priest or maybe to go easy on that cheap sherry she’s been indulging in.

The Karillapig and the Hippobuffafrog are now back in the washing-up bowl at the bottom of the garden.  The curious bat in the shrubbery is watching them.  The brain the Karillapig keeps in his purse isn’t up to its usual high-standard at the moment due to talcum powder becoming lodged in its hinges and so has gone into a sulk.  When the brain the Karillapig keeps in his purse sulks there’s no communicating with it, it’s best just to ignore it until it chills out again.  So, while having a break the Karillapig and the Hippobuffafrog decide to tune into the Moon news for an update:

The flower antenna is reporting the latest goings-on on the Moon via news bulletins sent down from John Revolting the Moon Oracle.

Question – Can you remember from the previous episode the discovery made by the cheese miners?  The discovery was of a secret door underneath the layer of cheese that makes up the Moon’s surface.     Yeah, that.

So… the evil Flapperbiller has ended up venturing through the secret door underneath the layer of cheese that makes up the Moon’s surface.  Once through the door and down the tunnel that goes upwards, the evil Flapperbiller has discovered a door that is not really a door.  The door is not really a door because it’s a window.  To get through the door you have to go through the window, the only problem being when your half way through the window it changes shape, so if you’re not quick you risk being beamed through space and time back to Monday morning when it’s actually a Friday.  Nobody wants that!

Luckily the evil Flapperbiller is stealth-like and so gets through the window that is a door without being chucked back to Monday morning.  Bonus.

In the other corner of the circle is a couch with a table in front of it.  On the table is a nice cup of tea and some scones.  On the Moon, nice cups of tea and scones are therapists who are specially trained to deal with the Moon’s guardian angels.  It turns out the clumsy Moon critter is the one and only ‘Clyde Bump-a-lot-of-stuff’ who suffers from growing a new finger every time he bumps into something.  Now he has forty seven fingers, so is finding it challenging buying gloves.  The Moon guardian angel despairs.  The nice cup of tea and the scones also despair.  The evil Flapperbiller doesn’t really care, and is now heading back into the tunnel that goes upwards through the window that is a door to see what else he can see.  Mayhem will undoubtedly follow…

That’s quite an update John Revolting has beamed down through the flower antenna on the Karillapig’s head.

The Karillapig and the Hippobuffafrog are still being watched by the curious bat in the shrubbery.  They don’t care, they’ve come up with a plan for their investigations.  Once the talcum powder debacle has calmed down it will be forwards and onward – and upwards hopefully – or round and round?  Who knows?  We’ll just have to wait and see in the next thrilling instalment of the Karillapig’s adventures on Earth….

In the meantime, if I offer any good advice to you then let it be this:

‘Always give 100% in everything you do – unless you’re giving blood.  In that case have a free biscuit safe in the knowledge you are doing good’.

Michelle Graham (tonight my feet are cold but I can’t put my slippers on because the cat is asleep on them….)

Being sick on slippers spells travel disruption for Karillapig!