It’s been a funny old week.  After catching up on ‘goings-on’ on the moon, the Karillapig and the Hippobuffafrog have returned to Earth.  To be more specific, to the washing-up bowl at the bottom of the Bumblebottom’s garden.

The catch-up on the moon was certainly interesting, what with the discovery of a secret door underneath the layer of cheese that makes up the moon’s surface leading to a labyrinth of tunnels that go upwards, with those tunnels leading to secret rooms, then the ‘Lesser-spotted-doofer’ creating a song and dance over ‘Nomis the frog/dog creature and his appetite for destruction in the sewing of too many buttons onto cardigans, the on-going A.R.S.C the moon union meeting, and also the arrival of the strange Earth Probe whatsit, all in all it was a busy day.

The arrival of the strange Earth Probe whatsit only highlighted to the Karillapig and the Hippobuffafrog their reasons for coming to Earth in the first place, which was to try to find out how Earth beings claimed to have visited the moon many – ahem – moons ago.

With a ‘pouf’ (invisibility engaged) the Karillapig and the Hippobuffafrog landed slap-bang in the middle of a prize cabbage plot on the allotment over t’fence.  Now there are two curious shaped dents and several very flat cabbages.  The allotment mafia are in uproar.  Everybody and his dog have been summoned to the ‘shed’ for emergency talks. 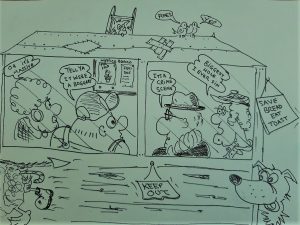 Once over the fence and back to the relative safety of the washing-up bowl at the bottom of the Bumblebottom’s garden, the Karillapig and the Hippobuffafrog decide on a plan.  The plan consists of having a crafty snooze in the washing-up bowl before feasting on newly made crochet squares – and then an amble.

*Neither the Karillapig nor the Hippobuffafrog are entirely sure what an amble is, but they have heard the phrase, and are desperate to try one….an amble that is. 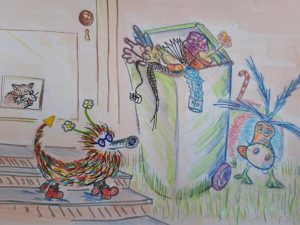 Back inside the Bumblebottom’s residence, the Karillapig and the Hippobuffafrog are currently engaged in a conversation with a milk bottle.  The milk bottle bears a startling resemblance to the Polly-lop man on the moon who helps Moon critters cross the road.  The Polly-lop man is the go-to moon critter should you need new spurs for your boots.

Here on Earth, the Karillapig and the Hippobuffafrog are getting no sense from the milk bottle, who appears to be indifferent.  He must be on his break.  All they want is advice on space travel for Earth critters, but not to worry, they can come back later…

Hang on a minute, what’s that sound?

The sound is a ‘bonging’ sound, and seems to be coming from the hall-way.  Right ‘o’ then, a new investigation is underway…

‘Well if I won’t go to the foot of my stairs’ is an ancient moon saying, and basically means, ‘Well I’ll be darned, is that a vessel used for space travel I see?’

“Well if I won’t go to the foot of my stairs” exclaim both the Karillapig and the Hippobuffafrog in unison (in Moon gibberish – obviously), “Is that a vessel used for space travel I see?”

You know it actually could be this time.  This vessel looks rather like the ones used by the devious Slava-dons, best known for their crafty take-over of the fashion police around Neptune where they infiltrated the system, thus making Neptuniums believe that wearing socks with sandals (on their hands) was acceptable.  It is widely believed among space critters everywhere that the Slava-dons have done the same on Earth, explaining why some Earth critters wear their kecks too low and show too much of their under grundies.

The vessel in question is a tall rectangular shape.  It looks a lot like it is made from wood, this is because it is made from wood, but I’m not going to be the one who points that out…   The tall wooden rectangular thing has a glass panel on the front, a face with hands on the top, and inside the glass panel is a long metal thing swinging from side to side.  This metal thing swinging from side to side is making a ticking noise.

*The furry thing with the pointy ears is watching intently.

*The furry thing with the pointy ears is fascinated.

Any minute now the vessel will take off.  The ticking is getting faster…

Hang on. This could be it.

*The furry thing with the pointy ears has nicked one of the springs and is batting it around the floor.

All this commotion, what with the boings and the springs springing has caused Derek Bumblebottom to get out of his chair.  Not a lot gets Derek Bumblebottom out of his chair, like that time Doreen Bumblebottom got stuck under the ‘hood’ hairdryer whilst having a blue rinse, she was gone for two days, yet Derek still didn’t leave his chair.  Now Derek has left his chair and is surveying the mayhem that is boingy, springy things all over the floor.  Derek grunts for Doreen, then shuffles back to this chair – there’s only so much excitement one person can take.

Well that particular voyage through space wasn’t quite what the Karillapig and the Hippobuffafrog were expecting.

It looks like Doreen Bumblebottom is offering all the boingy, springy things to the green god thing on wheels in the garden.  The Hippobuffafrog decides now would be a good time to nick the flat thing Derek Bumblebottom wears on his head, and offer that up too, so he scarpers to where Derek is now making a snoring sound in his chair, and fast as lightning, swipes the flat thing from his head.

Phew – that was quite a catch up.  The Karillapig and the Hippobuffafrog are feeling jiggered, so decide to pop off back to the washing-up bowl at the bottom of the garden.  The curious bat in the shrubbery has an eye on them.

Join me next time when we hear Moon reports on the evil Flapperbillers snoop through the secret door underneath the layer of cheese that makes up the Moon’s surface, how the Karillapig and the Hippobuffafrog are going on with Earthly investigations, and how A.R.S.C the Moon Union are getting on with their ever-lasting meetings.

..And remember kids, the world is made up of electrons, neurons and morons….  Be open minded, but make sure your brain doesn’t fall out.  Sitting on the fence will only give you a numb bum!

Michelle Graham……drinking too much coffee, but what the hell…

Baked beans cause bottom gas – but it’s not enough to aid space travel apparently….. Why doesn’t anybody tell me these things?