This could be the answer to the puzzling riddle currently plaguing most moon critters.  The riddle in question is how earth beings claim to have visited the dark side of the moon.

The last time the Hippobuffafrog got anything wedged in his ears was when he accidently mistook a pork-pie for a crochet square, thus causing all moon critters to have to say everything to him twice… the problem was he was competing in the moon equivalent of the ‘three-legged-race’ that being the ‘three-antenna-race’ so he missed the ready-steady-go.  This sparked a series of events resulting in A.R.S.C the moon union banning all blue trainers, instead insisting that competitors in any race wear only flip-flops.  The Hippobuffafrog has webbed feet, so given that flip-flops require long toes, this left him at a disadvantage.  Anyway, enough about that for now, let’s get back to where we were – or are – or should be….  I’m confused.

Lewis Clough, you may remember, is a super-human living on earth.  The Hippobuffafrog discovered Lewis Clough sleeps in a space station, so has brought the Karillapig for a good old nosey around.  Remember, both the Karillapig and the Hippobuffafrog are on earth to work out how earth geezers got to the moon.  So far, a washing machine and a golf trolley have been ruled out as possible contenders for the vessel used to aid space travel.  Well it’s an easy mistake to make, admit it, we’ve all mistook random objects for space ships…

Remember that the Hippobuffafrog is struggling to hear today because he has crochet squares wedged too far down into his ears.  It’s okay because the next time he sneezes they it will fly out (the Hippobuffafrog sneezes through his ears – did I forget to mention that?)  In the meantime, the Karillapig is having to say everything twice.  The conversation (if you imagine you can understand moon gibberish) is a lot like this:

Karillapig:  “I wonder how A.R.S.C the moon union are faring?  Have they remembered the moon brontosaurus’ must not eat any more stars?”….(x2)…..

Karillapig:  “Hmmm, I hope I didn’t leave my straighteners on”…(x2)…

So… everybody is asleep in Lewis Clough’s house.  Everybody that is apart from those pesky elf’s who are up to mischief and general skull-duggery. The Karillapig and the Hippobuffafrog are invisible so they don’t much care about being seen.  The Karillapig and the Hippobuffafrog have decided to sneak into Lewis Clough’s space station for a rummage.

The Karillapig and the Hippobuffafrog haven’t heard of this before.  From what they can tell, a bunch of earth critters dress in funny shorty outfitty costumes and kick a bag of wind about… the bag of wind has to end up in a netty thing, but not their own netty thing or travesty will ensue.  Apparently, earth critters come from miles around to watch.  This must be similar to the moon games where moon critters squirt water pistols through letter boxes at random passers-by whilst hurling cheese Frisbees at satellites.  The object of the game is to fill the boots of the random passers-by with as much water as possible.

I’m digressing again.  The lists of football players in Lewis Clough’s space station are very detailed.  The Hippobuffafrog memorises them in case he needs them later on….  In Lewis Clough’s space station there is a glass thing with swimmy things inside. The swimmy things are strange looking, they are swishing about, have fins on their backs and keep mouthing ‘Bob’. The Karillapig and the Hippobuffafrog have heard of earth government and parliamentary debates, and so assume this is they – or that, so leave them to it.  There’s probably an important debate happening right now….

There are port-holes on the wall of Lewis Clough’s space station, so in unison, the Karillapig and the Hippobuffafrog both take a huge leap into them.

*When two space critters take a leap like this, often they will travel through space and time (sometimes to another dimension) so great care is needed.  When taking this leap, all two space critters have to do is picture jam sandwiches and chant the words to “I’ve got a brand new combined harvester” and they will be able to leap through space and time…

Here goes.. The Karillapig and the Hippobuffafrog are picturing jam sandwiches and chanting “I’ve got a brand new combined harvester” …

The Karillapig and the Hippobuffafrog have ended up in a tree.  The tree is still inside the house of Lewis Clough.  This tree is not like any tree found on the moon.  This tree has lots of silver and gold doodahs hanging off it, and strings of shiny stuff. 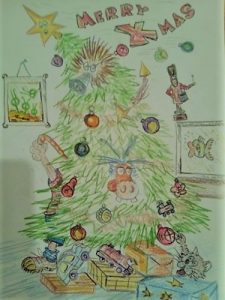 Right ‘O’ then, fast action is needed.  The Karillapig and the Hippobuffafrog will jump back to the washing-up bowl at the bottom of Derek and Doreen Bumblebottom’s garden and come back here later when the elf’s have beggared off.

Tune in for the next instalment where the Karillapig and the Hippobuffafrog continue their Earth investigations as well as taking a short trip back to the moon to check out what’s going down… and remember, the fur of the beholder is in the eye of the rucksack.  #michellegrahamwisdom

Michelle Graham.    (Writing this and sat with my furry thing with the pointy ears.  The grumpy one).

Apparently, a slap in the face from a wet fish will not aid space travel. They didn’t tell me this…..