Previously in the ‘Adventures of the Karillapig’ you may remember how the discovery was made that a washing machine is not a vessel to use for space travel.  I imagine you’ve all found that piece of wisdom startling, as did the Karillapig…….  So, to continue with this epic journey here’s this weeks nail biting instalment.

Nobody likes to be a soggy mess, especially not the Karillapig.

One good thing is that the Karillapigs slippers are now clean. Persisted wet through, but clean. The Karillapigs usual method of travel can resume once they are dry. In the meantime, investigations around the Bumblebottom’s residence will continue.

The box in the corner of the room is awake. What’s this? There’s an orange Earth being encouraging other bewildered looking Earth beings to purchase random junk to ‘flog’– apparently Earth beings like looking for junk to flog – who knew? Something called a ‘bicycle bell’ is being marvelled over by the orange Earth being…
The Karillapig thinks this is utter rubbish.

*engage flower antenna to change to observe another broadcast*

Now there’s a groups of Earth beings being subjected to a right telling off. There’s a caption at the bottom of the box

“my son’s sister’s brother’s mum is the same person”….

“my dog hooked up with a camel, now I’ve got a humpy litter”…

*engage flower antenna to stop the assault on the Karillapigs senses*

The Karillapig has turned off the box in the corner of the room and is now back in the room where the offending oblongy thing with the port-hole is. His slippers are dry – they smell a bit funny but they’re dry.

Remember, when the Karillapig uses the slipper mode of travel, he must stick his slippers up his nose, hop up and down ten times and chant the name of the destination backwards.
What the Karillapig is about to find out is that some translations from Moon gibberish to Earth gibberish can go wrong.

The Karillapig heard the word ‘flog’ on the box in the corner of the room. The Karillapig doesn’t know what this ‘flog’ is but assumes it’s a base where Earth beings launch into space.

*there’s a base on the Moon named after the Mighty Fleg. The Mighty Fleg was the only dentist on the moon brave enough to work inside the mouth of the ‘Flapperbillers’. Just so you know, the Flapperbillers have over 200 teeth, all of which have spinach wedged between them * – so you can understand his confusion.

So, here goes (hopefully the slippers will be fully operational):
1. Shove slippers up snout;
2. Hop on the spot ten times;
3. Chant the destination backwards (Flog = golf)
4. ……
5. Oh, good grief, what’s all this?

The Karillapig is out in the open but remains invisible – obviously. The Karillapig has landed in something yellow and soft. On first inspection, this looks a lot like the farms on the Moon where cheese is planted. Apparently, after having consulted the flower antenna, the Karillapig learns this type of cheese is called sand…….Mmm, sand. Come to think of it, the Karillapig is a little hungry…..

As if things weren’t bad enough in this sand stuff, now the Karillapig is surrounded by no less than six pairs of checked trousers. The owners of the checked trousers are discussing the strange new crater which has just appeared in the sand – 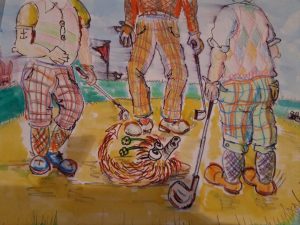 the owners of the checked trousers appear vexed.
As you know, via the flower antennas on his head, the Karillapig has access to some very exclusive information. You know that, but you may not know this… The moon oracle who is a space critter named John Revolting is the font of all knowledge, and regularly beams snippets of that knowledge to members of A.R.S.C the Moon Union.

So, the knowledge currently being beamed down through the Karillapigs flower antenna is this: Trousers are dangerous, in fact trousers are statistically more dangerous than sharks. 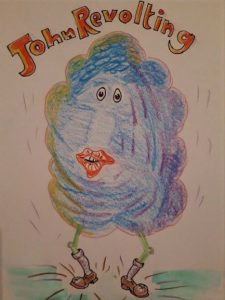 This information alone is enough to cause the hackles on the Karillapigs back to stand up, but when you now consider there is now talk of Birdies, Eagles and Albatrosses plus bogies – well frankly this is rather a step too far and so the decision is taken to make a sharp ‘exit-stage-left’.

The decision to make a sharp exit-sharp-left takes roughly 0.5 earth seconds, which by coincidence is the same amount of time it takes the Karillapig to notice a potential contender for the vessel Earth critters may have used to reach the moon…

“So, what’s this vessel?” I hear you ask. Well, the funny trouser people who were around in the sand pit seem now to be accompanied by large tubey things on wheels. There are long metal things with cluby bits sticking out of the tubey things. The Karillapig decides to investigate……

The best way to investigate is to get closer. The advantages of invisibility indeed help with this. Invisibility can be a bugger to spot, even more so since the Karillapig now wears boots. When he wore wellies, they made a slapping sound on his legs, so sneaking around undetected was often an issue – but that’s another story.

The metal clumpy things on sticks must be leavers, so having beamed himself up to get a closer look the Karillapig knows the best thing to do with leavers is to pull – so he pushes. The problem with pushing something that is not supposed to be pushed is that it can cause something to become unbalanced. Unbalanced is what the tubey thing with the metal things sticking out of the top has become… but there’s something else…..
Ignore the fact that now the funny trouser people are descending – I’ll come back to that – there appears to be someone else here hiding in the tubey thing. Someone familiar to the Karillapig but not familiar to you and I.

Ladies and gentlemen, girls and boys – allow me to introduce to you the ‘Hippobuffafrog’…..

Tune into the next instalment of Kpig news to find out who the Hippobuffafrog is, and how a super human name Lewis Clough helps save Christmas….. and remember, when life gives you lemons you can retaliate by throwing at people…. That’s what I do…

Michelle Graham the 1st – btw, mum to furry things with pointy ears…. I’m ranting, I’m off for a butty….

Tick-tock goes the clock – but will it aid space travel?