It was a Thwendinsday on the moon (that’s a day of the week) – it comes between Fidlesdenday and Moronsmidday.    There’re only three days on the moon and they’re all at night.

A.R.S.C the moon union had received word that those strange looking ‘things’ on earth were reporting landing on the moon.  This was baffling Kired the leader of A.R.S.C .  Kired is easily baffled.  (That’s why he never wears trainers, nor does he keep pot plants as they intimidate him).

Most space critters would rather staple their ears to the carpet than be in Kired’s company.  His charisma is non-existent, as are his brain cells – but then he is literally just a blob.  A.R.S.C- are still discussing the travesty of fake moon landings.  This meeting has now been going on for 50+ years.  According to Kired, the best solution would be to organise another meeting about this meeting to discuss the previous meeting, and the one before that.  The other meetings will have pre-meetings to determine when the meetings should be.   A.R.S.C the moon union are good at meetings.

The Karillapig is sick of this.  So he’s decided to pop on down to Earth to check things out for himself and …………..that’s where our real story begins.

Now you may think the journey from the moon to Earth was a long one. Not for the Karillapig. Oh no siree, inter-planetary travel from the moon for moon dwellers is much simpler than you would imagine.

The Karillapig has a horn-like nose. Not only is this useful as a trumpet to ward off the evil ‘Flapperbillers’, it is also a travel vessel. All the Karillapig has to do to travel is to put his slippers up his nose, hop on the spot ten times whilst chanting the destination backwards, then hey presto – there he will go – or be, depending on how you look at it. The one and only problem with this is the landing, more so the location of the landing.

Beyond the allotment live Derek and Doreen Bumblebottom.  Not a remarkable couple in any way, but for the discarded washing up bowl at the bottom of their garden.  The Karillapig has chosen to dwell in this washing up bowl as it bears a startling resemblance to one of the moon craters back home – apart from the colour, shape and texture that is – obviously.

Derek and Doreen Bumblebottom are married.  This means they don’t get on.  Time in the Bumblebottom residence is often spent exchanging grunts and glares behind the other’s back.  Derek Bumblebottom has his own chair – the same chair he’s been occupying for the past 40 years, hence the deep buttock crevice.  Doreen has been known to find the odd sock hidden in this buttock crevice, that and the missing TV remote control, yesterdays dinner and oddly, a bewildered spider plant.

Doreen is a keen event goer.   The events Doreen attends are ‘the master crochet squares society for the disgruntled spouse’.    By coincidence, crochet squares are considered a delicacy on the moon – so now the Karillapig has a reliable food source when he’s fed up of eating garden furniture.  Doreen is baffled by the disappearance of her crochet squares – as far as she’s concerned, she’s been on the same one now for nine months, and because she believes it’s all down to Derek, she’s regularly emptying bits of the cat tray into his stew. 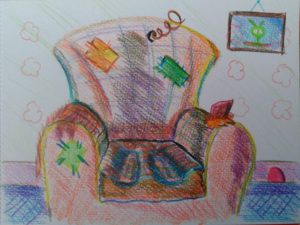 The only reason it’s dark is because it’s not light!….. My wisdom is never ending….